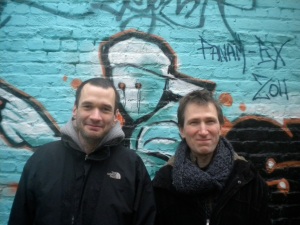 Dark Fader, established in 2009, is a duo formed by Roald Baudoux and Peer Baierlein which focuses on a sensitive approach to live electronic music. They create a sound which is extremely distinct and has very notable characteristics. From crisp granular impacts to fluid textures, from urban soundscapes to abstract sequences, from fleeting moments to developed structures, everything is smoothly balanced in order to create a perfect musical entity. With roots in acousmatic music, jazz, free improvisation and sound art, the two establish their own genre.  Dark Fader pays attention not to deliver automated compositions but rather aims to play with attention, creating an organic connection between gestures and processed recordings. The design and interplay between controllers, interactive software and its programming become a part of the compositional process. The introduction of multiple modulation layers turns the listeners into partners in an unrepeatable creative process.

Roald Baudoux was born in 1970. Following his graduation as a sound engineer at the belgian school IAD, he decided to use his knowledge for his own artistic work. He attended acousmatic composition courses with Annette Vande Gorne at the ‘Conservatoire Royal de Mons’ (B). These studies offered him the opportunity to benefit from the knowledge  and experience of personalities such as François Bayle, Philippe Mion, Michel Chion, Stéphane Roy and Robert Normandeau. He discovered free improvisation applied to electroacoustic music with Christine Groult at the ENM de Pantin (F). Roald Baudoux composes acousmatic concert music. He’s also active in the field of live electronic music and has worked with musicians such as Joe Higham, Fabrizio Rota and the Inaudible collective.
He also creates interactive and intermedia sound installations.
Among Pierre Schaeffer’s multiple ideas which have established electroacoustic music, he retains the generous one of « most general music being ». He’s interested in links between aesthetic models and the hardware or software tools to bring them into life. He develops gesture controllers, among which the Mébiii.
Roald Baudoux has started teaching various courses at the ‘Conservatoire Royal de Mons’ as soon after his graduation in this school: sound synthesis techniques, sound objects theory, sound recording techniques, computer music software, interactive techniques, etc. Since then he has constantly devoted a big part of his time for teaching during schoolings and workshops for several institutions (Conservatoire de Luxembourg, Musiques & Recherches, Académie de musique de Soignies, TechnocITé, etc).
He also works as a journalist and editor in the field of electronic music (e.g. Les Cahiers de l’ACME). He has established the http://www.electroacoustique.be website.

Peer Baierlein started his professional studies at the early age of 16 at the ,Musikhochschule Köln‘ in Germany.
He first became a classical trumpet teacher before beginning his studies with Prof. Malte Burba as an orchestra musician at the ,Musikhochschule‘ and with Arno Lange at the ,Deutsche Oper‘ in Berlin. In 1996, he moved to Leuven in Belgium to study with his favourite jazz-trumpet player, Bert Joris at the ,Lemmensinstituut‘.
Upon completion of his studies, he moved for a year to New York City in 2000, to take lessons and to play his instrument abroad. He then came back to Belgium, where he finished his studies for jazz trumpet and -after that- specialised as ‘lead-trumpet’, also at the ,Lemmensinstituut‘.Between 2004 and 2006, Peer Baierlein has been studying classical composition with Piet Swerts. He has completed his studies and followed a special education for composing film music with a.o. Denis Pousseur, Victor Kissine and Jean-Luc Fafchamps.
Since 2011 he is studying ,new media‘ at the ,HfMT‘ in Hamburg.
He is a regular guest as a trumpet player at the ,Deutsches Schauspielhaus‘ in Hamburg since 2006.
Peer is the composer and musical director of theatre plays in  Hamburg, Hannover, Stuttgart and Magdeburg.
In 2012 he was asked to make some re-mixes of the classical opera ,Manon‘ for the opera house in Kiel.
He also created the music for several documentaries and short films in Belgium.
Baierlein played in the Brussels Jazz Orchestra and a.o. with Kurt Van Herck, Emil Mangelsdorff, Ron Van Rossum and Dré Pallemaerts. He could be heard on the famous Belgian festivals of Jazz Middelheim (2001: Maria Schneider Workshop Big Band), Gaume Jazzfestival, Park Jazz Kortrijk and ‘Jazz in‘t Park’.
He is the leader of the ‘Peer Baierlein Quartet’ (aka ‘Jazzisfaction’) and the ‘Electric Miles Project’.